Check it out! Club Penguin’s got a sneak peek for what’s coming in July!
Hello Penguins!

Lots of you are asking what’s coming up! Here are some of the things you’ll see in July:

I can’t say too much just yet, but brand new features are on their way…
In other news, check out the new items at the Gift Shop today –
and then head to the Iceberg to see the fireworks! As always, we want
to hear what you’re doing, so let us know.

Wait a second! It’s Wendnesday! How can the catalog be out already? How strange. Oh well, I’d better get to updating for that!
Bubblegum423

The Club Penguin Team has another sneak peek for us!

Adventure is in the air, as we prepare for the first ever “Island Adventure Party” on Thursday!

The team was inspired by all the mermaids and pirates they’ve seen in the past, and wanted to do something big for them.

So the whole island is being transformed for this party. There will be adventures everywhere, with lots of rooms for pirates, castaways, mermaids, commanders and TONS more. And for members we have a special surprise…

So what kind of adventures are you looking forward to the most? Let us know in the comments!
Until then… Waddle on!

I’m looking forward to the snowball fights! Me and Dinoboyzach2 are going to face off and see who wins.

What are you looking forward to? Let me know below!

Awesome! Check it out! I found a post for a to be released Club Penguin Wii game! It’ll be called Club penguin Game Day! Check it out below! And here’s the link if you’d like to read it yourself!

Based on the snow-covered virtual world that’s captivated millions around the globe, Club Penguin Game Day! will delve into the environment, characters and storylines of the online playground of Club Penguin like never before. The game will include innovative ways to connect with ClubPenguin.com and new, interactive mini-games to challenge and engage the whole family.

“Club Penguin has always maintained a really strong emphasis on social, family fun and the value of working together,” said Lane Merrifield, co-founder of Club Penguin and executive vice president of Disney Online Studios. “Moving onto the Wii platform lets us offer parents a great opportunity to connect with their kids in the comfort of their own living room around an active game that’s participatory, cooperative and a lot of fun for everyone, and that’s something we’re really excited about.”

In Club Penguin Game Day!, players create and customize a penguin and compete in a variety of single or multiplayer sports-themed racing and performance events such as Java Sack, Fast Freeze, Sled & Slide and Sumo Smash. Each time players beat a challenge, they conquer a zone on the island. The ultimate goal is for players to work with their team and conquer as much territory as possible.

“As the Club Penguin phenomenon continues to grow, it makes sense to bring the brand to Wii,” said Craig Relyea, senior vice president of global marketing, Disney Interactive Studios.” Club Penguin Game Day! combines the distinct look and feel of the Club Penguin virtual world with competitive games that are easy to pick up and play using the Wii Remote.”

Club Penguin Game Day! will allow players to transfer their customized penguins via their Wii Remote(TM) to a friend’s Wii for use in gameplay. Once back on the original console, high scores, coins and customization items earned will merge with the player’s profile.

As with the two DS games, players can also upload coins earned in game to ClubPenguin.com, but the new game will take the elements of online-offline connectivity even further by also allowing players to synchronize their in-game penguins and achievements with their online penguin accounts.

Awesome! It sounds cool to me. I think it would be a good family game. 🙂 I do not have a Wii, so I will not be able to buy it… But it’s okay. I can hold off on this one. The game is set to be released sometime in Fall 2010. I’m guessing August.

What do you think? Will it be a good game?

Hey guys, I just got back from school and I have a post from the Community Blog!

There are a few new surprises coming up this week (including a new room!), but I’ve got a sneak peek for something coming up NEXT week – your new orders. Check this out:

We’ve heard many agents report in, wanting to know what they can do to protect Club Penguin. Starting next week, you’ll receive orders – for your first WEEKLY assignment. So, are YOU ready?

In other news – many of you have asked if you’re allowed to talk about the EPF. Well, since agents now have the power to invite citizens to join, you can definitely reveal you’re part of the EPF. Just don’t discuss any classified information (such as about a certain polar bear.)

Hehehe, Awesome! A weekly assignment huh? That outta be exciting! I wonder what it’ll be!

What do you think this assignment will be? And what about that new room?

Until next time, Stay Sharp and Keep Alert!
Bubblegum423

Check it out! The EPF HQ looks snazzy now that it’s nearly complete.

The system has a file scanner, meaning Herbert won’t be able to put a virus into these computers without us knowing! 😀 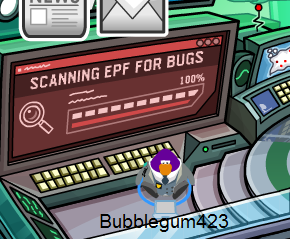 Also, EPF agents are to report to the HQ on the 15th for new orders. I wonder what they’ll be…

What’s this big green thing? A teleporter? Or a holding cell for Herbert… Oh! It could be a training simulator!

Also, Billybob has a sneak peek for us. I’m guessing it’s a digital archive of the previous HQs. Maybe that’s what the green machine is!

Let me know what you think will happen on the 15th! And your ideas!

Hey everyone, I’ve got another post from the CPT. Check it out!
Hello Penguins!
It’s nearly June, and that means lots of new events are coming up fast!
Many of you have asked what adventures are on their way, and we wanted to give you a sneak peek. There’s going to be even more new things for agents, and a TON of stuff for those of you who like the sea.

So what do you think? Let us know!
Until then… Waddle on!
I think that the first picture is a pirate.. something.. a pirate party maybe? The second one.. for EPF agents perhaps? And the third… a new stage or outfits? What do you think? Comment below!
Until next time,
Waddle on and discover new adventures!
Bubblegum423

Hey everyone, Herbert’s Revenge released today, so make sure and grab a copy from Walmart, GameStop or Amazon. 🙂

Many of you are wondering what’s coming next for agents. Well, we’ve been listening to your ideas on how to make the experience even better. And I’m glad to say that agents are about to get a huge upgrade!

The team’s put together a ton of new stuff that will begin launching this week! Agents can expect new challenges. But first things first – we need a new HQ.

Check out the construction that’s started at the Ski Village today – you might notice a few important details. What do you think of all this new agent stuff?

I knew that penguin on the front page had to be an agent! I wonder what’ll happen next?

Have you gotten Herbert’s Revenge yet? Let me know how it is! (I have to wait until finals are over before I can get it. :()

Until next time, Waddle on and keep a sharp eye out!

Many of you are wondering what’s coming next for agents. Well, we’ve been listening to your ideas on how to make the experience even better. And I’m glad to say that agents are about to get a huge upgrade!

The team’s put together a ton of new stuff that will begin launching this week! Agents can expect new challenges. But first things first – we need a new HQ.

Check out the construction that’s started at the Ski Village today – you might notice a few important details. What do you think of all this new agent stuff?

I do not own Club Penguin or the pictures on this website, except the ones I made myself. Please though, don't copy the posts or pictures without permission or giving credit. Thank you. :)

Translate This Page To: